It’s been just over 5 months since Winkeltje has launched on steam, so I figured I’d give an update on some of the more interesting stats from the last 4 months or so.

In my previous blog post I briefly mentioned that we had recently pushed the Chinese translation to the default branch. I wanted to follow up on how those stats have changed in the last 4 months.

Sales by country in the first month

In that first month, China contributed to 2% of the total sales with the US and Germany making up the bulk of the sales. Here’s how the graph looks now, just over 4 months into the EA launch. 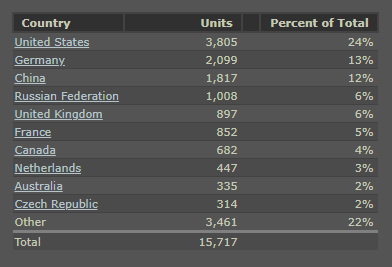 Sales by country after 5 months

After the release of Simplified Chinese we saw a significant increase in daily average copies sold in China, going from an average of 6 to 12 a day. Simply supporting another language doubled our income from China.

#1 is where we launched the first translation to Simplified Chinese, at that point there’s a visible increase in daily sales already, with some minor spikes. #2 is when a Chinese website wrote an article about our game, which combined to around 800 sales in a few days. Overall, the Chinese translation has been a huge success for us.

This is something that surprised me quite a bit. Our daily average during the Steam Summer Sale was $257. The week before that, our average was $300 and the week after it was back to exactly $300 again. We did not participate in the Steam Summer Sale with a discount at all, so I expected our daily revenue to go a lot lower during that time.

There were some controversies about the Steam Summer Sale and wishlist deletions, so I’d figure I’d share some stats about that as well.

Wishlists in the last 3 months

The spike at #1 is when the Chinese article I mentioned earlier launched, #2 is the region when the Steam Summer Sale was happening. In that period we 944 wishlist deletions, averaging at 63 deletions and 49 additions per day. We currently have 29,470 wishlists, so that’s quite a significant number.
For comparison, the week before and after the Steam Summer Sale we averaged 20 deletions and  94 additions per day.

If you haven’t done so yet, you can buy Winkeltje over on Steam.
You can also follow me on Twitter: @elwinverploegen