It’s been a month since we launched Winkeltje on Steam, and I thought I’d share some of the numbers from that first month.

In the first week, Winkeltje sold just over 6000 copies on Steam (which is also the only platform we’re selling on right now). This comes down to roughly $46,500 in its first week. A month later, that number has gone up to 8956 copies sold, totaling just over $71,000.

We will end up getting roughly half of that in our bank account (and then get to pay taxes).

It cost us about $45,000 to get Winkeltje to Early Access, so we’re not out of the red just yet but we’re definitely getting there.

Zones showing when Winkeltje had the “Currently popular” tag

When we just launched Winkeltje, we received the “Currently Popular” tag on Steam. While I cannot be 100% sure on how this influences your store placement, it does seem to have somewhat an effect on sales. The Green zones in the image above are (roughly) when our game had the “Currently popular” tag. 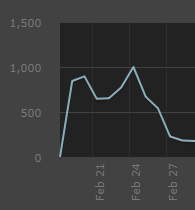 Corresponding with the above zones are the total amount of sales we had per day. Note that our launch day (Feb 19th) was not our biggest sales day (as is usually the case). Instead, Feb 24th was with exactly 1000 sales. The launch day was only our 3rd largest sales day (845) so far with Feb 25th coming in 2nd at 896 sales.

The one statistic I kept finding was that 2000 wishlists is the magic number that you want at a very minimum when launching your game. I’m not sure if there’s any truth to that, but the conversion rate (which is defined by Steam as ‘Wishlist purchases & activations as a percent of all purchases & activations‘) of wishlists in those first few days was huge for us: 52% in the first day and hovering between 25 – 40% ever since.

When we launched Winkeltje, we had 1975 wishlists. A week before that we only had 414. Over the last month this number has grown to 19967, which I hope will follow the game along as we go through the Early Access process.

I’m going to highlight this for a very specific reason, tags seem to matter a lot to how people find games. We added our Steam tags on February 5th, at which point we were averaging 5 wishlists per day. On February 6th this jumped to 45 and then averaged out to around 50 until the first YouTube videos just before the launch showed up.

Wishlist additions. The green line is when we added steam tags.

When we were looking into what tags we should add to Winkeltje, we simply looked for similar titles and looked at what tags they had assigned. If they were relevant to our game we’d add them as well. Do note that these are the tags that are added through the Steam Store page, not the ones you add in the Store Admin page.

When looking at the total sales of the game, there are only a few surprises. We obviously see the USA at the top spot with quite a large margin (which makes a lot of sense, since there’s a lot of Americans on Steam). 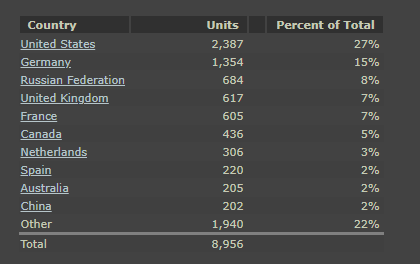 Sales by country in the first month

Let’s look at how this chart looked after the first few days, and how it then shifted around as time moved on. 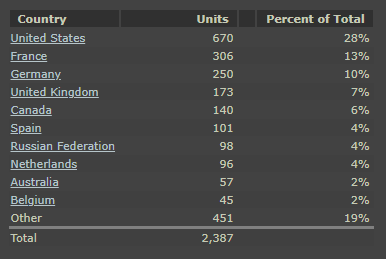 Sales by country after 3 days

Comparing the 2 charts, there’s a major shift between some of the countries. Notably Germany jumping up from 10 to 15%, which I can only attribute to the German translation being put in after day 3 and some amazing YouTubers making videos in German. Russia also jumped up quickly and France was the one that dropped off fastest.

German sales, the green line is when the German translation went live

The green line in the above image is when we uploaded the German translations. At this point most of the other countries saw a drop in sales, while Germany was still going up.

France being so high up in the initial list is probably attributed to a French YouTuber who made a video back when we were still in closed alpha (which prompted a lot of French players to join our Discord) and who then again made a few videos when the game came out.

The Simplified Chinese translation has been pushed to the default branch recently, so perhaps I will make another post in a month as an update to see if that increased the sales in that region. All of our translations have been done by the community, who have been amazing in the speed at which they translated the game and how well they keep up with all of our rapid changes (seriously, you guys are awesome).

For us, the Early Access launch was only the start of the journey. We’re very happy with how the sales have turned out in the first month, as this will allow us to invest more into the game than we had hoped for. If you’re interested in reading about our pipeline and development process, you can read about that in a previous blog post over here.

If you haven’t done so yet, you can buy Winkeltje over on Steam.