our rambling
Want to be notified of new blog posts?

UPDATE: The patch should be up as well in the US region as well as patch 1.01 and contains the same fixes.

Patch 1.02 is now live for the EU, US will follow as soon as it has gone through certification. Those who already have the game will be hit with a 5GB patch, you can safely cancel this unless you want to obtain the final trophy. Those who will get the game on Tuesday should get patch 1.02 as the version they download initially.

In our last blog we hinted to a release date for Fragments of Him on PS4. We are happy to announce that Fragments of Him will be available in the Europe and Americas region on PS4 on 26-09-2017. 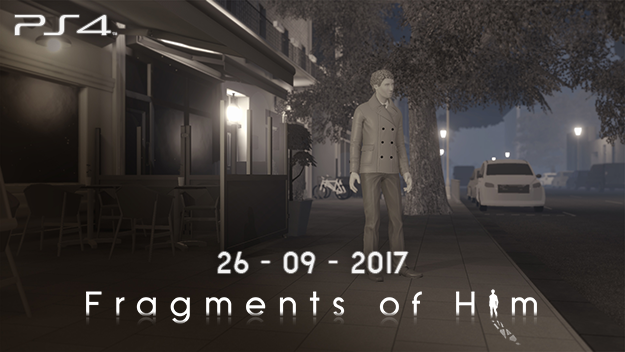 Updates on Sassybot developments have been scarce over the last year. This is caused by contract work that only allows us to work on Sassybot for 1 day a week. With this fraction of time available to us we managed to port Fragments of Him to PS4 and prepare for release in two major regions. Despite our constrained efforts we are happy to bring the story of Will, Sarah, Harry, and Mary to a whole new audience this year.

Soon, our contract will come to an end and we will be able to spend all of our time on a new project. What this is exactly is too soon to disclose but we expect to make major strides in the months to come. If you are interested in what Fragments of Him is all about and you want to support us, please consider getting Fragments of Him on Steam, Xbox One, or PS4.

Elwin and I are very excited about getting back to full-time development and will keep you informed on future developments.

It’s been a while since our last update, but we finally have some more news to share regarding the development of the PS4 version.

We’re currently at the point where we’re happy with our current PS4 build. We’re now waiting on Sony so we can start the certification process. While we have a lot of confidence in the stability of our build, there can (and likely will) be things that we have missed on our end. Some more technical details on the PS4 build:

The next time we write a blog post we will likely announce the release date, so keep an eye out for that!

Hello internet, friends, followers, and everyone else,

Over the past couple of months Sassybot has been silent, but not forgotten. With the end of 2016 drawing near we are aware that our hopes of releasing the PS4 version of Fragments of Him in 2016 is not going to happen. Don’t worry though. We still have every intention to bring Fragments of Him to PS4 in 2017 when it’s ready.

In the past we have blogged about the wonderful reviews but disappointing sales of Fragments of Him on Steam (link to blog) and Xbox. As of yet, the 2.5 years of work we invested in this title has yet to break even. To mitigate the costs of running a game development studio we have taken up some work on the side, which has slowed down the porting process. With the remaining time we are working on the PS4 version of Fragments of Him and are slowly moving forward towards a build that we can submit to the certification process.

Although the financial side of this game development business may have come as a blow, we are not ready give up and throw in the towel. The wonderful things we have seen and read from all the people that got to experience Fragments of Him is definitely a big support for us. Please keep up the support, it’s what keeps us and this business going.

In case you have missed the news last week. Mata Haggis has been nominated for the ‘Best Writing in a Videogame’ by the British Writer’s Guild Award for his writing in Fragments of Him!

very happy to announce that Mata Haggis has been nominated for a British Writer’s Guild Award for his writing in Fragments of Him!

The competition for this award is steep and all deserving of the award in their own regards. We are certainly very happy to be among such great company. You can find the full list of nominees on the website of the Writers Guild of Great Britain.

Thank you, and take care!

Fragments of Him Grabs 5 Nominations at Game Connection October 12, 2016

We’re very happy to announce that Fragments of Him has been nominated for 5 (!) awards at Game Connection (Paris, October 26-28)!

We have been nominated for:

Tino will be attending the event for the entire duration. If you want to set a meeting you can email us or tweet us at @SassybotStudio. If you’re attending you can also just walk by for a quick chat. We’ll make sure to inform you when we have more details on our booth location at the event.